Let us grab a li’l about the city of TAJ MAHAL, one among Seven Wonders of the World. Yes, nowhere but Agra… Agra, Uttar Pradesh which is considered to be the most visited city by the tourists in India. The sole city possess many of the eye-catching monuments, mostly the mughal architectures.

“Want some?? Come n get some with one click”

Wish to realize a dream vacation? Welcome to the amazing tourism city of the TajMahal – Agra, India. The seat of the great Mughal rulers for ages Agra, India offers its 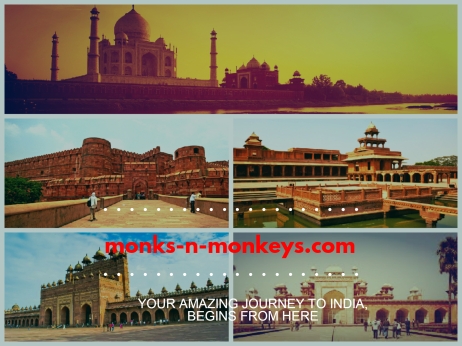 treasure trove for all the tourists from India and abroad. Even though Agra, India is synonymous with the Taj, the city stands in testimony to the great amount of architectural activity of the Mughals. TajMahal is the epitome of love, poem in white marble, one of the Seven Wonders of the World besides being the pride of India. In fact all the monuments of Agra, India have contributed to Agra Tourism. Terrific Agra Packages from us will ensure you plan your Agra Travel soon. Delhi to Agra to Jaipur make the famous Golden Triangle tour of India.

History of Agra is amply evident from the numerous historical monuments in and around the city. Though the history of Agra city is linked with the Mughal dynasty, numerous other rulers also contributed to the rich history of Agra. Agra was founded by Sikandar Lodhi (Lodhi dynasty; Delhi Sultanate) in the 16th century. Babur (founder of the Mughal dynasty) also stayed for sometime in Agra and introduced the concept of square Persian-styled gardens here. Emperor Akbar built the Agra fort; Jahangir beautified it with palaces and gardens. Shahjahan marked the zenith of Mughal architecture, when he built the Taj. The post-Mughal era’s history of Agra saw the rule of the Jats, Marathas and finally the British taking over the city.

The most famous of the monuments of Agra, India is the TajMahal. TajMahal is a symbol of the devotion and dedication of love. TajMahal of Agra is a monument built by emperor Shah Jahan In the memory of her wife Mumtaz Mahal. TajMahal expresses the magnificence of Mughal architecture. The Taj has done wonders to Agra Tourism. Taj is a must in each one of the Agra packages offered by us. Agra to Jaipur is an interesting package option.

Besides the TajMahal amongst the other famous monuments of Agra, India is the Agra Fort. Agra fort was built by Emperor Akbar. He was undoubtedly the Greatest Mughal emperor of India. The construction of Agra fort commenced in the 1565 and completed in 1571. Built with red sandstone Agra Fort is a mixture of the Islamic and Hindu styles of architecture. Agra Tourism would be incomplete without this monument. Most of the Agra packages offered by us take you to the Agra Fort. Agra to Jaipur is the usual choice in pacakges.

It is a tomb built with white marble in the typical Islamic style architecture. It was built by the Mughal Empress Noor Jahan in the memory of her father Itmad-ud-Daulah. It happens to be one of the must visit monuments of Agra. This monument of Agra is usually included in all the Agra packages. Travel from Agra to Jaipur is usually taken up by many tourists.

The tomb of the great Mughal emperor Akbar is worth visiting. Akbar’s tomb is a mixture of many architectural styles and completely different from earlier Mughal Buildings. Visit to this monuments of Agra is esential to make your Agra tour complete. Visit to this monument is generally a part of the Agra packages

Famously known as the city of Ghosts, it was built by the Great Mughal Emperor. Fatehpur Sikri is a place worth visiting to discover how once the city could have been which has now turned into ruins. many a Agra packages include a trip to Fatehpur Sikri also.

HAVE A WONDERFUL TIME, 🙂

KEEP VISITING OUR BLOGS, KEEP KNOWING OUR AND EVERYONE’S INDIA